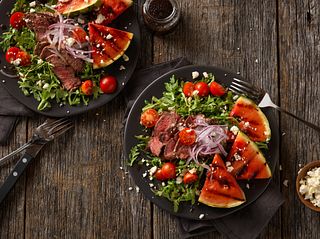 BEDFORD - The Northeast Beef Promotion Initiative is partnering with Beef. It’s What’s For Dinner., funded by the Beef Checkoff, to launch “United We Steak,” a new summer grilling campaign showcasing 50 steaks and all 50 states.

“United We Steak” celebrates not only a shared tradition of grilling delicious steaks, but also what makes each state unique when it comes to this beloved pastime. The idea comes to life at UnitedWeSteak.com with an interactive map of the United States made from 50 hand-cut state-shaped steaks. The interactive map is packed full of grilling spirit, state-specific recipes and fun facts that can help consumers nationwide “beef up” grilling season this summer.

Underpinning the campaign is a recognition that across all 50 states, there is a universal love of beef sizzling on a summer grill. According to research conducted by Beef. It’s What’s For Dinner., which is managed by the National Cattlemen’s Beef Association, a contractor to the Beef Checkoff, nearly one-third of consumers say that they plan to grill more this summer than they have in the past.[i]

While every state has special traditions and recipes when it comes to grilling beef, some of those unique to the Northeast, and featured on UnitedWeSteak.com include: 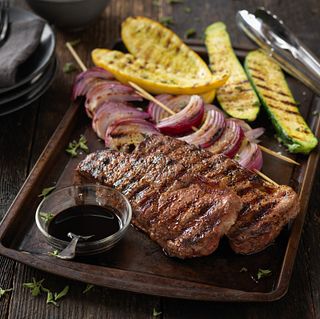 Maple marinades and beef go together like maple syrup and Vermont. After a dip in a maple syrup-based marinade, Strip Steaks are grilled with pears and onions to create a unique and tasty salad.

“There’s nothing like the sound and smell of beef sizzling on the grill during the summer grilling season,” said Kaitlyn Swope, Director of Consumer Affairs with the Northeast Beef Promotion Initiative. “United We Steak’ not only celebrates a love for grilling that brings families together, but also the beef farmers and ranchers who work hard every day to keep beef on grills all summer long.”

As part of the campaign, the state and U.S.-shaped steaks will be featured in national advertisements, including still images and videos that will be shared on digital and social media platforms. The advertisements will also be shared on video platforms including YouTube and Connected TV in an effort to inspire Americans to grill up their favorite beef meal no matter where they live. The Northeast region is getting in on the fun too with localized advertisements that will reach proud Northeast grill masters.

The campaign follows the kickoff of summer grilling season, which Beef. It’s What’s For Dinner. marked with a new video released Memorial Day Weekend showcasing the dedication of farmers and ranchers to raising safe, sustainable and nutritious beef. It concludes with the simple declaration: “Summer Grilling Season Brought To You By Beef Farmers and Ranchers.”

More beef grilling inspiration and information can be found at United We Steak and BeefItsWhatsForDinner.com.

About the Beef Checkoff

The Beef Checkoff Program was established as part of the 1985 Farm Bill. The checkoff assesses $1 per head on the sale of live domestic and imported cattle, in addition to a comparable assessment on imported beef and beef products. States may retain up to 50 cents on the dollar and forward the other 50 cents per head to the Cattlemen's Beef Promotion and Research Board, which administers the national checkoff program, subject to USDA approval.